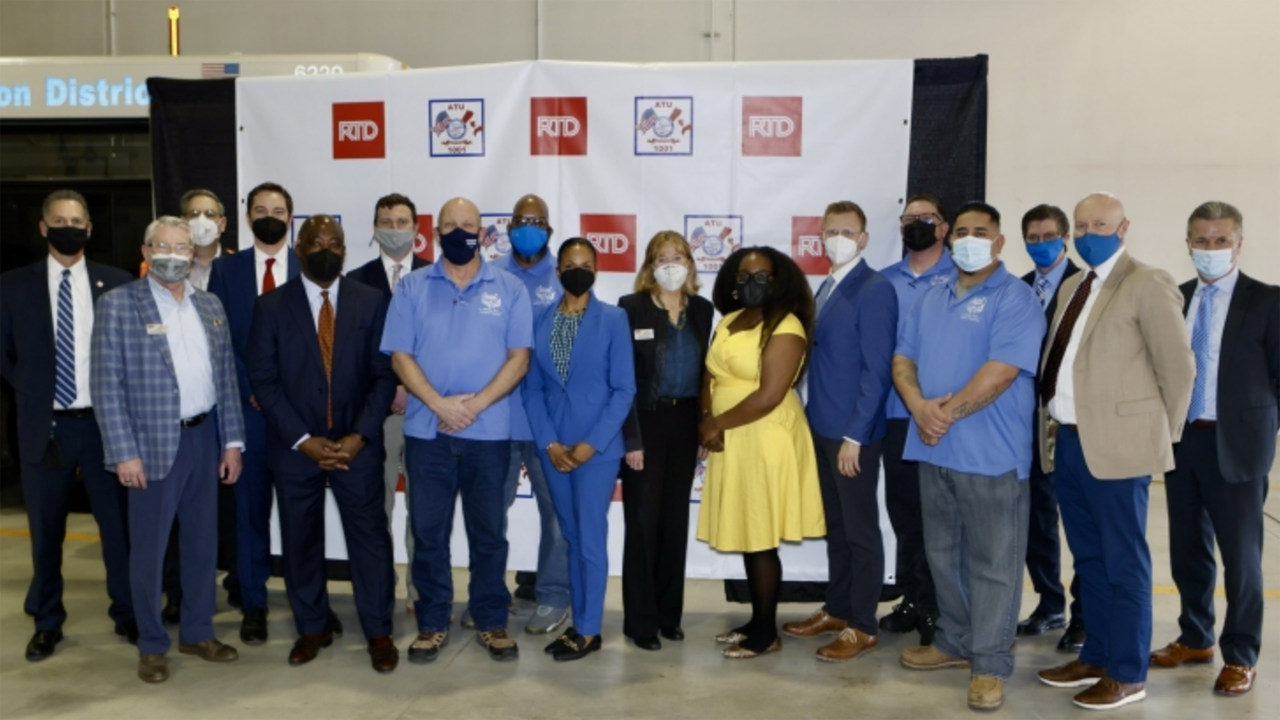 The Denver RTD Board of Directors has authorized the agency’s General Manager and CEO Debra A. Johnson (pictured ninth from left) to enter into a three-year collective agreement with the Amalgamated Transit Union Local 1001, which represents two-thirds of RTD employees.

the Denver RTD On March 18, the board authorized the agency’s Executive Director and CEO, Debra A. Johnson, to enter into a new three-year collective agreement with the Amalgamated Transit Union Local 1001 (ATU 1001), which represents two-thirds of RTD employees. The agreement covers wages, hours and terms of employment.

The management teams of RTD and ATU 1001 reached an agreement in principle on February 28, after more than five months of negotiations. On March 17, ATU 1001 President and Business Officer Lance Longenbohn advised General Manager/CEO Johnson that union employees had ratified it.

“Providing RTD-represented employees with a decent market-based wage, better quality of life and career opportunities were central to negotiations for the most recent contract, which will be made retroactive to January 1, 2022 and will extend until December 31. 2024, to align with the agency’s annual budget,” RTD reported. “Current RTD employees will receive the new wage rates, retroactive to January, by May 2022. [collective bargaining agreement] came into force in March 2018 and was extended for one year due to the COVID-19 pandemic.

All salaries of employees represented by the RTD union will be increased by more than 25% during the term of the contract, starting with an increase of 16% or more in the first year and 4% each year thereafter.

A 16.6% raise for RTD bus and rail operators in the first year raises their starting hourly wage from $20.58 to $24, and offers the first opportunity for a six-month raise instead of one year, with increases every six months and reaching the highest rate after four and a half years. Other entry-level salaries include $30.25 for a general repair mechanic in bus operations; $35.65 for a signaling/traction power maintainer in light rail maintenance; $34.48 for a journeyman electrician in facility maintenance; $33.77 for an electro-mechanic in the maintenance of light trains; and $29.68 for a track maintainer in commuter train maintenance. Other topics discussed included improving pension benefits for all employees; a modified work week (expanding a four-day, 10-hour work week to all groups, where possible, is under consideration; the previous contract provided for this approach for certain maintenance positions) ; flexibility in how employees can take vacations; improvements related to operator access to toilets; and the establishment of U.S. Department of Labor-registered apprenticeship programs for occupations such as mechanics.

“The agency could not provide high-quality transit service throughout the Denver metro area without the dedicated union employees who make up the majority of the workforce,” Johnson said.

“The negotiations were conducted in good faith and many significant improvements were made to wages and working conditions,” Longenbohn said. “Under the leadership of Executive Director Debra Johnson, the District has demonstrated a commitment to its unionized employees and their well-being that is sure to contribute to our common goal of agency success.

N.J. Transit announced on March 18 that it will develop a sustainability plan that covers themes such as water and energy use, fair transportation, clean vehicle technology, resilience and customer experience. The agency’s first step will be to gather input on sustainability priorities from state stakeholders, including the general public, conservationists, community leaders, and users and employees of NJ Transit. A series of webinars and surveys will be conducted, with the first webinar scheduled for March 23.

“The commitment to sustainability is one of the most important commitments NJ Transit has made as we strive for a clean energy future,” said New Jersey Department of Transportation Commissioner Diane Gutierrez-Scaccetti. and president of the NJ Transit Board. “We are on track to fully transition to a zero-emission bus fleet by 2040.”

“Through the comprehensive roadmap established through NJT2030, NJ Transit is working harder than ever to advance a more sustainable future for our planet,” said President and CEO Kevin S. Corbett. “NJ Transit’s first sustainability plan will build on efforts already underway for a cleaner train and bus fleet, expanding and optimizing solar power assets, implementing efficiency and conservation, in short, by pursuing our goal of being one of the most socially responsible and environmentally responsible transit agencies in the world.

Projects submitted for a retirement village in Navenby