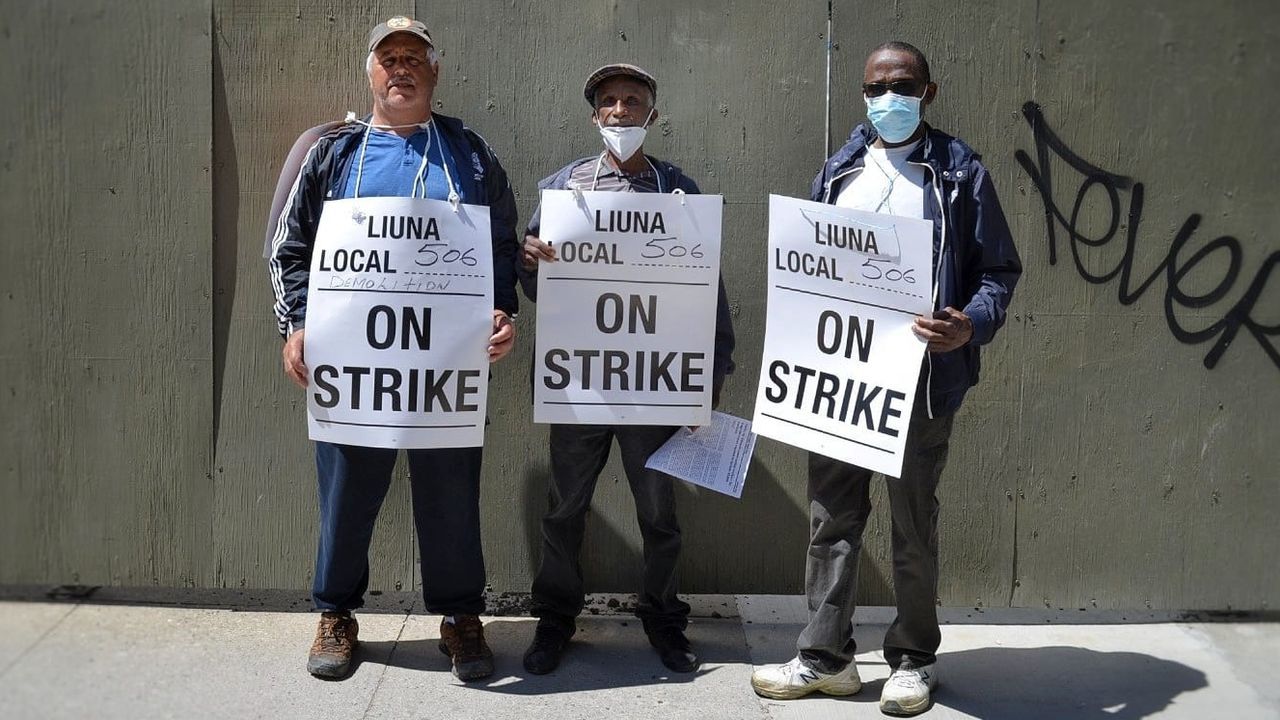 Are you a construction worker in Ontario? Contact the World Socialist Websiteto tell us what you think of the betrayal contracts of the unions and to discuss the creation of rank-and-file committees to show the way forward for your struggle.

Unions are trying to scuttle the biggest construction workers’ strike in Ontario in 20 years. More than 43,000 workers went on strike earlier this month for big wage gains amid soaring inflation and record profitability for property development and construction companies.

The union that represents the most workers, the International Union of North American Workers (LiUNA), has already imposed concession contracts on most of its members. LiUNA intentionally withheld details of the new contracts in what amounts to pursuing a deliberate strategy to keep workers isolated and sell out the strike at the first opportunity. Workers forced to vote on tentative agreements sealed between union bosses and companies had no way of knowing fully what they were signing up to.

The little information that has been revealed through leaks by rank-and-file workers shows total wage increases of around 12% or less spread over three years. This is actually a severe pay cut considering that the cost of living has risen 6.8% year over year.

Fifteen thousand carpenters organized under the Carpenters’ District Council of Ontario remain on strike and are due to vote on a tentative agreement this Friday, May 27. Carpenters are expected to decisively reject the sell-out deal, which will no doubt contain below-inflation wage increases and plenty of nasty surprises that strikers won’t learn about until long after they return to work.

International Union of Operating Engineers Local 793, which represents crane and heavy equipment operators, ended its strike on May 20 with increases of just $3 a year for the next three years . Some small unions representing painters and sheet metal workers are still negotiating.

All construction workers, whether on strike or recently dismissed, must be warned: the union leadership has cut you up like a pie and sold you piece by piece to the employers’ associations, when you should all have been on strike together and refused to sign until you all received an above-inflation pay raise and improved working conditions.

It’s not too late to take control of these strikes and get the pay raises and cost-of-living adjustments you need to survive 7% inflation and feed your families. Even the brief and sporadic interruptions to construction due to the strike had a powerful impact across the province.

However, if you want to win, you must organize in rank-and-file committees completely independent of the union bureaucracy, made up of the most principled and trusted workers. You must be prepared to oppose the union-management conspiracy to cripple and divide you. You must do this by organizing in different bargaining units, locals and unions.

This is the complete opposite of what the union bureaucrats have been doing throughout these strikes.

First, the leaders of the various construction unions have never challenged the anti-labour labor relations law which limits the strike to a 45-day window ending June 15. After that, any matter still in dispute is automatically referred to arbitration. , which always favors the employer. Essentially, unions and employers can starve workers for a month and a half, knowing that they will eventually get away with it.

Second, even though all construction workers work under similar conditions and for roughly similar wages, they have been segregated from each other along completely arbitrary lines. WSWS reporting teams visited a construction site where members of LiUNA Local 506 were picketing while other members of the same local were busy working inside. In other words, the union leadership did everything it could to ensure minimal disruption for employers and the most ineffective strike possible, including sending its own members through its own picket lines. In many cases, workers have been denied strike pay.

Third, the union leadership imposed a grassroots information blackout. Union bureaucrats withhold the details of sell-out deals concocted with employers until the last possible second because they know how workers will react. More often than not, rank-and-file workers saw selective “highlights” of contracts minutes before being forced to vote on them. Social media is filled with questions and comments from workers asking for details on this or that contract, with no response from union officials. Union bureaucrats spent much more time talking to employers than to their own members.

Grassroots strike committees must therefore be set up urgently to carry out the following demands:

The so-called union leaderships are nothing more than well-paid, privileged bureaucrats who have nothing in common with the average construction worker. Even those who claim to have “climbed the ladder” have come to terms with the pro-capitalist outlook of the unions when they traded the construction site for the boardroom. They do not see the strikers as fellow workers whose interests must be served, but as a source of dues income who should be silent and know his place at the bottom of the ladder.

Joseph S. Mancinelli, LiUNA’s International Vice President and Regional Director for Central and Eastern Canada, earns a total annual compensation of $402,224. Other union leaders are no doubt bringing in similar six-figure earnings, shielding them from the hardship workers have to endure with these pay cuts in real terms.

The union bureaucracy’s determination to sabotage the strike without addressing any of the workers’ needs stems from its fear that a genuine struggle for secure and decent jobs will trigger a social explosion in conditions where millions of workers in Ontario and across in Canada are feeling the impact of runaway inflation, more than two years of a deadly pandemic and the threat of world war. They fear a mass movement of workers like the plague because it would sever the unions’ close relationship with established political parties, all of which are responsible for imposing austerity, attacks on workers’ rights and cuts in expenses.

LiUNA, who previously backed the Liberals, moved far to the right, throwing her support behind Premier Doug Ford and his Progressive Conservatives. Since coming to power in 2018 with a right-wing populist campaign inspired by fascist ex-US President Trump, Ford has maintained an unbroken record of social spending cuts, public sector wage freezes and strike breaks. The Liberals and the New Democratic Party are no better, having done the same when each was in power.

The reality is that construction workers, like workers in all industries, will find no way forward by supporting any of the establishment parties. All major parties serve the interests of major promoters like PCL, EllisDon and Aecon, who will and have sacrificed workers’ jobs, wages and lives for their bottom line.

Construction workers looking for a way to fight back must take up political struggle by creating rank-and-file committees to unify their strikes with other sections of the working class who are also eager to fight back against decades of capitalist austerity. The past few months have seen courageous strikes and struggles by public sector workers in New Brunswick, workers at CP Rail, signal operators at Union Station in Toronto and distribution workers at Metro grocery stores in across Ontario. Over the next few months, teachers and education support staff in Ontario, as well as educators and public sector workers in British Columbia will prepare for the strike. Across the border in the United States, 20,000 dockworkers are set to walk off the job on July 1, while strikes by farm equipment makers CNH in Iowa and health care workers across the country are already underway.

What all of these struggles require above all is a socialist and internationalist perspective to unify them and ensure victory. The fight for decent wages to ensure a reasonable standard of living, safe workplaces to protect against COVID-19 infection and workplace injury, and provisions for a comfortable retirement demand a frontal assault on the deadly grip exerted by the capitalist financial oligarchy on all aspects of social and economic life.

There’s no time to lose ! Contact the World Socialist Website today for help establishing a rank-and-file strike committee in your workplace.

Help when you need it: the NSW Retirement Village Residents Association (RVRA) answers your questions about living in a retirement village