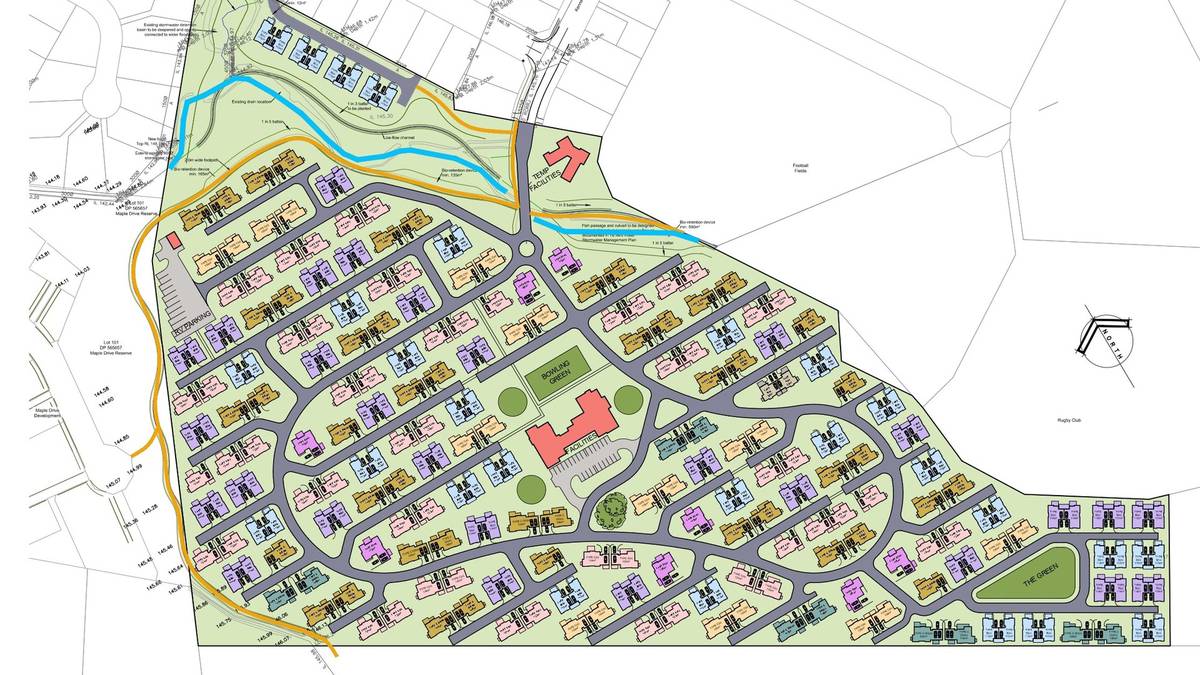 Putāruru Country Estate will comprise 254 housing units and a major recreational and community facility on a 16 ha site on Kennedy Drive. Picture / Provided

The village will be on a 40-acre site at Kennedy Drive, next to the local golf course, and is expected to include a 254-unit village as well as recreation facilities and dementia care.

Work on the $200 million project is expected to begin in October.

Putāruru-born and raised developer Tim Bartells of Bartells Group said the Putāruru retirement village would be his third after the Longridge Country Estate model in Paeroa and Amberley Country Estate in Christchurch.

The Putāruru Country Estate will consist of 254 mixed-size villas ranging from 95 to 185 m² and an aged care facility offering a rest home and care for people with dementia.

The development will also include a 2000m² recreational and community facility with a heated swimming pool, spa, gym, cinema, restaurant and cafe, library, doctors rooms, pool and pool tables, a grand piano, Menz Shed, a bowling green and a virtual game. Golf.

“It is important to us that our residents have exceptional facilities to enjoy with other residents, friends and family. The site on Kennedy Drive is a very attractive rural setting bordering the Putāruru Golf Course and the Rugby Clubs and of football.”

“There are real economic benefits of a large project like this for the community. In addition to creating a beautiful place for retirees to live, there are plenty of job opportunities for everything from earthmoving to engineering. civil [to] building and construction… There is also continuity of work because this project will last for many years.”

The project follows other recent multi-million dollar investments in the district, such as the South Waikato Trades Training Center being built in Tokoroa and the Olam Dairy Factory to be developed just south. from Tokoroa.

Although Putāruru Country Estate will include hundreds of smaller villa units, Bartells says there is no question of cramming into as many villas as possible.

“Each villa has more space for outdoor living areas, lawns and gardens.

“We have also put a lot of technology in our villas, all equipped with emergency call buttons… [and] TV and computer terminals in each room. This is a centralized system that includes fully monitored security systems for the peace of mind of our residents.”

Putāruru already has a retirement village, consisting of a 106-unit nursing home run by Rangiura Hospital.

Bartells sees the new Putāruru Country Estate as a complement to this and is currently in discussions with Rangiura Chairman Jos Van Loon on how the two businesses can work together.

“Rather than being in competition, I see the services we offer as complementary and I really want to work with Jos and his team to provide the best care possible.

“My mother Pearl was one of the very first residents of Rangiura Retirement Village and later was at Rangiura Rest Home. The care she received…in the village and in the care was fantastic.”

Bartells grew up in Putāruru, going to school at St Mary’s and Putāruru High School where he met his partner Jenny Wilson.

“There’s a lot of history in Putāruru for me, so being able to come home and do something like this has a special meaning for me.”