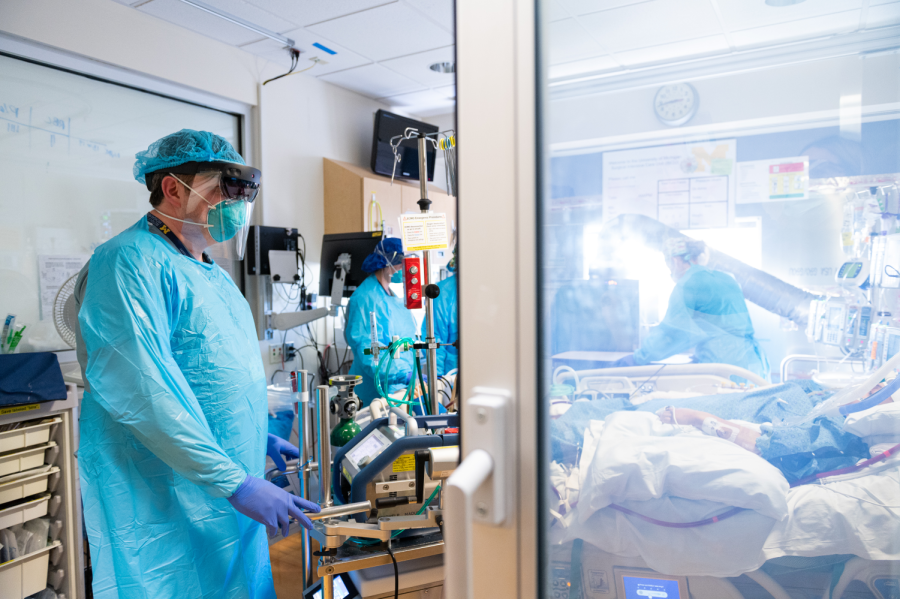 Dr. Mark Cohen examines a COVID-19 patient using a Microsoft HoloLens2 headset while at the University of Michigan. Cohen will take up his post as the new dean of the Carle Illinois College of Medicine in May.

Dr. Mark Cohen, the new Dean of Carle Illinois College of Medicine, will begin assuming his responsibilities next May and will also serve as Senior Vice President and Director of Studies at Carle Health.

At its March 17 meeting, the university’s board of trustees approved Cohen’s appointment following a nationwide search to replace Dr. King Li, the former dean who is retiring.

It was just four years ago in 2018 when Carle Illinois was established and the first class of medical students were admitted to the college. Now this class is about to graduate, and college announcement that all of its graduating students match the residency program of their choice.

Since its inception, while led by Li and two other assistants, Carle Illinois has grown to include over 600 faculty members and has received provisional accreditation pending full accreditation.

As Li announced his retirement, he described his excitement for the future of Carle Illinois and its growth under Cohen’s leadership.

Cohen was a professor of surgery, pharmacology, and biomedical engineering at the University of Michigan. Cohen described most of his current work as leading innovation and entrepreneurship efforts on the Michigan medical campus.

“Dr. Mark Cohen has a lot of experience managing innovation programs at the University of Michigan Medical School. He is definitely in a great position to lead this new medical school from an establishment phase. now in a growth phase,” Li said.

Even before Cohen found out about the dean’s job opening at the university, he said he was very interested in Carle Illinois because it was the first school to incorporate engineering into the core curriculum.

“I think it’s the commitment to intertwine innovation, engineering design, and all that ability to build and solve problems in medicine throughout the program that really interested me at Carle Illinois,” said Cohen. “This provides a real opportunity to turn this into meaningful and impactful solutions for our patients and the community.”

“I think there are many opportunities to partner with Carle Health and the community to really create impact and take things to another level. This is a very exciting opportunity for many reasons for me, but working with innovative students every day is something I look forward to,” said Cohen.