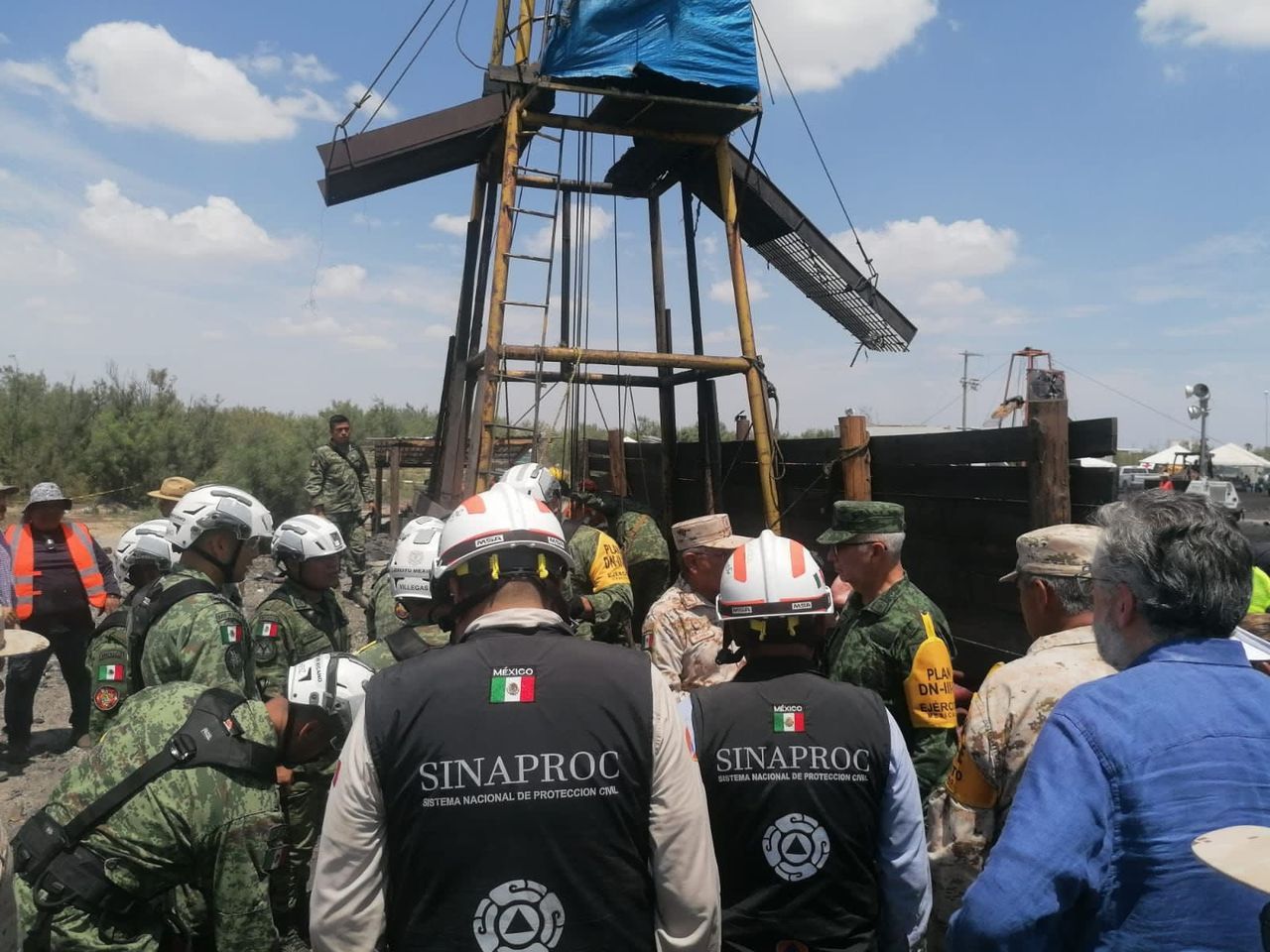 The collapse of the Pinabete coal mine in Coahuila, Mexico on August 3 left 10 miners trapped and their escape route flooded. They are now presumed dead. Four minors were able to escape and are now hospitalized. On August 15, the 13th day of rescue, following a second flood in the galleries of the mine, the nature of the search changed. It is now a question of recovering the corpses of the 10 men. *

Rescue officials estimate it will take at least six to 11 months to recover the bodies. “We were fine until an opening widened from the nearby abandoned mine, which stores more water,” Mexican President Andres Manuel Lopez Obrador said.

The “adjoining mine”, Las Conchas, which closed in 1996, is very close to the Salinas River, the source of the flood waters. The company (El Pinabete Mining Company) had obtained an operating license from the Ministry of Economy and was supposed to be inspected by the Ministry of Labor (in charge of all mine inspections).

Permits are issued even though another branch of government, the Mexican Geological Service (Servicio Geológico Mexicano—SGM) determined some time ago that the entire area was unsafe for mining.

In 2013, the Mexico news magazine, Process obtained from SGM maps of the coal region in which many areas of the region are hatched with red lines indicating where not to mine.

The Pinabete mine was operated under contract with the Federal Electricity Commission (CFE) to supply fuel to public power plants located in Coahuila in accordance with the current energy policy. Since taking office in 2019, Lopez Obrador, known as AMLO, has pursued a more nationalist energy policy, favoring the use of fossil fuels extracted in Mexico.

Pinabete consisted of three interconnected narrow vertical shafts leading to galleries 60 to 80 meters deep, flooded. By any standard, the mine was dangerous; its miners had no safety equipment, there was no emergency or hazard-mitigation equipment, and no way to signal the surface. The miners worked bent over in the gallery of the mine.

When the pit flooded, the 10 victims simply did not have time to escape. However, local parents and miners suggested that they might have survived initially by finding higher ground and therefore strongly condemned the authorities’ slow and ineffective response.

According to a report by The Day correspondent Leopoldo Ramos, the lack of safety conditions brought back the tragedy of February 19, 2006, when a methane explosion killed 65 miners, 63 of whom are still underground. The mining giant IMMSA (Industria Minera México Sociedad Anónima) is directly responsible for these deaths.) a division of Grupo Mexico, a powerful, wealthy and well-connected conglomerate with tentacles in oil, copper, transportation and coal mining.

As with the long list of mining disasters and deaths in this region, no company, government agency, or union has ever been held responsible (less than a month after the Pasta de Conchos explosion in Mexico City, the federal chamber of deputies approved constitutional reforms that rewarded the coal barons, including IMMSA, with new operating permits guaranteeing more than $500 million in profits).

According to official sources, in consultation with relatives, the plan is now to dig a hole next to the mine to recover the 10 bodies. Following this, a monument will be placed in honor of the fallen men.

In 2012, under the administration of Enrique Peña Nieto, a “Pact for Mexico” was signed by the main political parties (PAN, PRI, PRD, Greens), which, among other things, abolished underground coal mining, in the absence of guarantees for the safety of minors. A decade passed without any change. State and federal regulators continue to treat the coal barons with kid gloves at the cost of human lives.

Over the past 25 years, at least 153 coal miners have died in preventable mining accidents (80 since 2006). A government mine safety and inspection system exists in name only and lacks funding.

AMLO said his administration will investigate how the Pinabete mine was operated and whether it received permission from federal authorities. “A full investigation will take place,” said López Obrador. When questioned, the president assured that one of his campaign promises had been to no longer grant operating permits in this region.

Following the Pasta de Conchos disaster in 2006, family members of the 65 victims, some of whom had been violently suppressed by police and company thugs for trying to organize their recovery, formed a group non-governmental, the Pasta de Conchos Family Organization (Organización Familia Pasta de Conchos—OFPC). Throughout the next 16 years, she fought to recover the remains and to have the true causes of the accident made public. The group has also organized rescue teams to help victims of other mining disasters. In 2020, the AMLO administration launched the attempt to recover the 2006 victims; the project so far has been riddled with delays.

According to OFPC studies and testimonies, compiled in a book, El Carbon Rojo de Coahuila—aqui acaba el silencio (“Coahuila’s Blood Coal – here ends the silence”) published in 2018, under the auspices of the Heinrich Böhl Foundation, more than 3,000 miners were killed between the opening of coal mines in the region in 1883 and 2017.

The text recounts in detail the complete lack of security measures by the companies and the indifference of the government authorities to the conditions in the mines.

The third chapter is an exposition of the corporate role of the miners’ union (Trabajadores Mineros, Metalúrgicos, Siderúrgicos y Simiares de la República Mexicana) which “represents” many miners in the region. The chapter presents evidence of deals between the wealthy union bureaucracy and the coal barons. The briefing describes how the union would threaten to strike for security reasons, only to later call off at the last minute, a common practice for unions around the world.

Each of these administrations maintained close ties to the corporate and corrupt miners’ union. In 2006, following the explosion of Pasta de Conchos, the leader of this union, Napoleon Gomez Urrutia, was forced to take refuge in Canada, after being denounced for his acts of corruption. Through his ties to the AFL-CIO, he managed to obtain Canadian citizenship.

He is currently a congressman for the ruling Morena party, having been hosted by AMLO himself.

That the union has not changed is evidenced by one of the most cynical reactions to the deaths of the 10 miners of union bureaucrat Javier Martínez Valadez of the mining union’s National Executive Committee. He acknowledged that the Labor and Social Security Secretariat only had two or three inspectors in the area and claimed that if there were more inspectors, mines like Pinabete would not exist. He went on to say that although mines are death traps, whenever governments propose to remove them, the people of the region oppose it, as it is their only source of employment.

Blaming the miners for their own deaths, Martínez added: “Furthermore, these workers choose to earn more money instead of security or retirement benefits. They are not used to working in an orderly manner and do not want to pay [union] contributions or be punished for absenteeism. If in four or five days they earn well, that is enough for them to live.

The Coahuila mines are part of a geological region that extends north across the Rio Grande separating Mexico from the United States and Coahuila from the US state of Texas. On both sides of the border, the coal is blood red. The profits of the coal monopolies are extracted at the expense of the lives of miners. Throughout the first half of the 20th century, in Texas and Coahuila, massive strikes by miners were met with state repression in the name of private capital.

In 1903, in Thurber, Texas, a powerful coal miners’ strike pitted workers against the Texas Rangers and helped create the United Mine Workers. The strike included a march by miners and their supporters out of town that virtually emptied this important mining town.

In Coahuila, a 1950 miners’ strike at the mines of Nueva Rosita, Palau and Clorete turned into a virtual civil war, with the government sending in troops, repressing the miners and trying to starve them into submission. Following this strike, Coahuila miners marched on Mexico City, a trek of 1,500 kilometers (900 US miles), with the intention of appealing to President Miguel Alemán. The mass protest known as the Hunger March never achieved its goal; the president, a member of the Institutionalist Revolutionary Party (PRI), imprisoned the marchers in a sports stadium and forced them to surrender. The defeat of this strike paved the way for the government to set up a “charrossold out corporate leadership for this union.

Just as the Pasta de Concha explosion in 2016 was followed by spontaneous protest strikes by copper and other sectors of the mining industry, the AMLO administration, along with coal barons and multinational corporations are acutely aware that this new catastrophe can provoke workers’ struggles across the country.

The World Socialist Website and the campaign of the International Committee of the Fourth International for the formation of rank-and-file committees to lead these struggles, rejecting charros unionism and the false assurances of the AMLO administration, unions and companies. These committees must lead the fight to end coal mining permits in the geologically unstable regions of Coahuila; for miners to take control of inspections and safety measures; and work to exploit workers-controlled mines and industries. Grassroots committees need to reach beyond Mexico’s borders and build alliances with miners around the world.

The revival of Trotskyism in Mexico, the nation that welcomed Leon Trotsky in 1937, through the creation of a section of the International Committee of the Fourth International, is essential to this struggle.