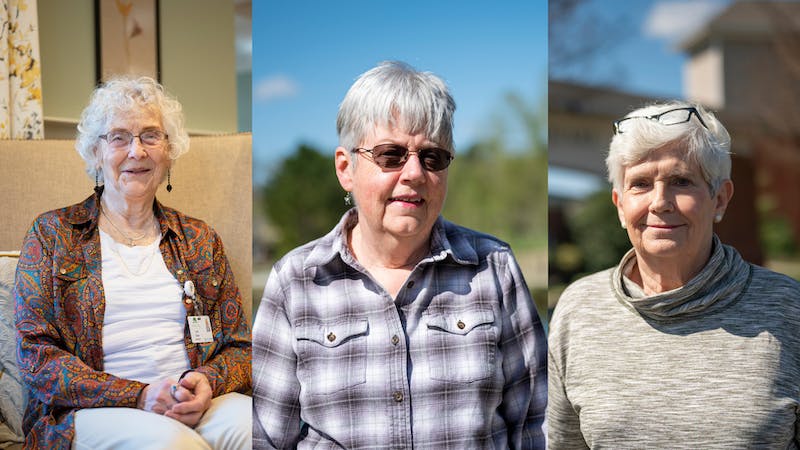 Residents of The Village at Brookwood have spent the past few weeks emptying their closets and packing their suitcases. Burlington’s retirement community collected items to add to North Carolina’s aid and donations to Ukraine and neighboring European countries.

Mary McNeil, chair of TVAB’s Care and Concern committee, said there was a response to the donation campaign the minute flyers were posted and emails were sent.

“On the first day, a resident cleaned out his closet with jackets and sweaters, shoes and suitcases,” McNeil said. “He alone gave enough to fill the two suitcases he had.”

According to McNeil, the Care and Concern committee serves as a group and support system that takes care of all residents, whether it’s welcoming new members, delivering flowers to those in the hospital, or connect with the community. But now he finds ways to support others outside of TVAB. McNeil said two other residents helped lead the mission – Lori Gore and Helen Moore.

Gore, who has been part of the community since 2019, said he saw residents handing over beautiful clothes and sanitary supplies to donate, even some with tags on them. Small things like backpacks, flashlights and batteries were also handed over. Each article will do a lot for those in Ukraine, especially for those who have lost almost everything or had to evacuate to surrounding countries.

“I was really proud of the people here and grateful that they were able to support us and give from their hearts,” Gore said. “A lot of people have big suitcases that they no longer need when they are 80 or 90 years old. They returned the big suitcases and we filled them as well as possible.

Both Gore and Moore repacked the items in boxes. According to TVAB, the donation items filled an entire van and van.

“I was just amazed that our items were in such great condition,” Moore said. “It just made me a little proud that they could come up with stuff to help our friends in Ukraine.”

Max McNeely, Life Enrichment Assistant at TVAB, worked closely with Gore and Moore as they coordinated the campaign. McNeely, who has worked at TVAB for nearly six years, said residents are full of energy and are always looking for opportunities to get involved.

“People understand what needs to be done, and step in and help,” McNeely said. “It’s a small part of what these Village at Brookwood residents do. They are dynamic, they are ready to do things. They tell us, ‘Hey, we have a lot of time, so use us.’ »

Although these residents are only part of one community in North Carolina, their care and concerns will reach others in other countries.

“It’s amazing to be part of such a caring and supportive community,” McNeil said, “We’re always looking for ways to support our local community, as well as the world.”