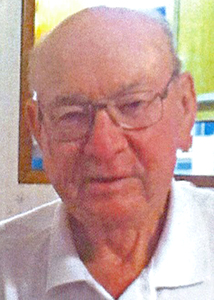 James L. (JL) Horn, 90, died in his heavenly home on Friday, August 5, 2022. He was surrounded by family members, his caretaker and a hospice nurse, in his Churchill apartment in Commerce , in Texas.
A funeral service was held on Tuesday August 9, 2022 at Cross Trails Cowboy Church in Fairlie, TX. Interment followed at Sonora Cemetery in Fairlie, Texas.
James was born on May 24, 1932, to Jake and Thelma Horn in Delta County, Texas. He attended Cooper and Commerce high schools before joining the United States Army in 1951, where he learned his extraordinary cooking skills.
He married Violet Lee Pope on August 1, 1952, in Commerce, Texas, while in the United States Army, stationed in Killeen, Texas. They had two sons, Michael, born in 1954, and Larry, in 1956.
James is survived by his sons, Michael and his wife Louise, of New Braunfels, Texas, and Larry, and his wife Lisa, of Hot Springs, Arkansas; brother, John and wife, Linda; grandchildren, Jeff Horn and his wife Kari of Lubbock, Texas, Jessica and Josh Heckel of Batesville, Arkansas, Lindsey Horn of Hot Springs, Arkansas, Nolan Horn of Rowlett, Texas, Lina Horn of Dallas, Texas, Brittany Williamson of Fayetteville , Arkansas, and Tyler Horn of Round Rock, Texas; 10 great-grandchildren, as well as several nieces and nephews.
He was predeceased by his beloved wife. Violet, parents, Jake and Thelma Horn, sisters Donna Thetford, Carolyn Gordon and Loretta Kibler.
James was passionate about all aspects of his life, including his cotton ginning businesses and his ability to cook most menus with unparalleled results. But his family was his first priority. This desire to create memories and expanded family bonds was exemplified by the holding of an annual reunion of the Horn family at their lake homes beginning in 1978. This tradition of family bonding was carried on by grandson , Jeff and Kari Horn, who also held recent meetings at their home on Lake Possum Kingdom. James and Vi also organized many meetings for the Pope clan.
His passion for the cotton ginning industry led him to establish several ginning-related businesses that operated in Lubbock, Texas for nearly 40 years. James’ inventions and innovations dramatically changed the cotton ginning industry, and many of his United States-patented machines are still working in cotton gins around the world.
His lifelong interest in cotton ginning began when he was a teenager. Tom Young was building a new gin in Fairlie, Texas around 1950. Tom hired James and mentored him because of his work ethic, dependability and willingness to learn. Tom trusted this teenager to maintain the big LeRoy engine that turned a single shaft that ran the length of the gin to power all the machines.
After James’ service in the United States Army, he graduated from an automotive technical school in Nashville, Tennessee. But interest in gin machines took over, and he traveled to West Texas to work in the cotton gins. Then, for eight years, he worked as a ginning service repairer and eventually managed sales and repair services for Moss Gordon Lint Cleaner, the world’s largest manufacturer of lint cleaners at the time. It was there that he developed amazing knowledge of the inner workings of all pieces of ginning equipment. He was an account manager for Continental Gin Company for a time.
His business ventures began in 1966 with partnerships that evolved into Horn & Gladden, followed by the creation of Horn Gin Machinery Company and Cotton Machinery, Inc. This first venture started with $600 and a pickup truck. In the early 1980s, this emerged into a service and manufacturing business that at times employed over 300 people.
He was not an engineer by training but had an engineering mind not bound by linear thought. He hired good engineers to help him turn his ideas from a sketch into a working machine. Even after retiring in the late 90s, he continued to consult for some gin owners and design innovative improvements.
The Horns retired in 2000 and moved to Possum Kingdom Lake, where James engaged in part-time estate sales. Upon his second retirement in 2005, they moved to Campbell, Texas to be close relatives. When their health permitted, they enjoyed attending Sunday services at Cross Trails Cowboy Church.
While living in Campbell, he grew a vegetable garden that drove traffic up the highway. He also joined a morning coffee and social group on Highway 50 near Commerce. It was there, over coffee, that he caught the attention of author Jim Ainsworth and others with his business stories and amusing jokes. He also served on the board of the Audie Murphy Cotton Museum in Greenville, Texas.
The pallbearers were Larry Horn, Jeff Horn, Tyler Horn, Tucker Horn, Raider Horn, Welker Horn and Thomas Horn.
Services outsourced to Commerce Funeral Home and Cremation Service, Commerce, Texas.

A nature reserve and a retirement community evolve together