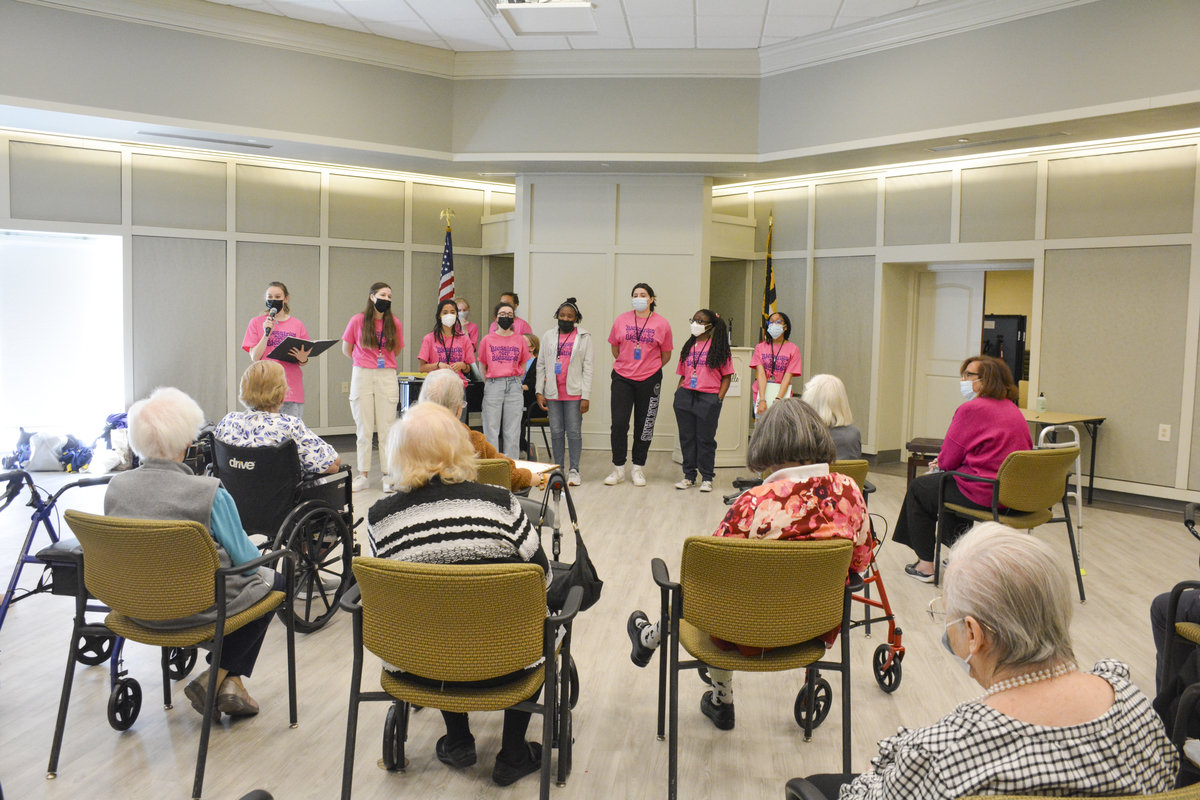 The voices of St. Croix Academy students echoed from the Lang Hall auditorium as they sang a diverse selection of songs, from Christmas standards to the Lizzie McGuire soundtrack, to an elderly audience at the Village of Rockville, a continuing care community retreat in Maryland.

It was just one of many events held across the Washington area as part of Kensington Academy’s Day of Service on April 27, when nearly 400 students were joined by faculty and staff at 29 sites performing various types of services. The community outreach program began in 2018 in the year of the 150th anniversary of Holy Cross. This year, service activities also included Holy Cross students unloading food and serving in a pantry, delivering meals to families, volunteering on a farm, helping with administrative tasks at a pregnancy center in crisis, cleaning up along the Anacostia River, helping load bikes for the Bikes for the World project, cleaning up parish grounds, and helping plant and harvest fruits and vegetables in the bank’s urban garden Capital Region Food

Ten senior citizens of Holy Cross performed the concert for senior residents and then assembled a “balloon arch” at the Village of Rockville.

The singers wore bright pink shirts with the “Blessings on Blessings” design for retirees. The phrase references the Bible verse in 2 Corinthians 9:8-9, “They freely distributed their gifts to the poor; their righteousness endures forever.”

Holy Cross seniors Anna DeMino, Mercy Asamoah and Emilia Moberg are members of the academy’s Tri-M Music Honor Society. After the concert, they sat down to reflect on their morning of service.

“I think it’s an amazing program for our school, we didn’t have one last year because it was mostly virtual, but to actually get out into the community, it’s like our last hurray as a senior class. , because next week is our last week of school,” DeMino said.

DeMino is a freshman at Holy Cross, having transferred there after her freshman year. “So it’s like a fun outing for all of us to go out and do service together, and I’m so lucky to see how much of an impact we can have in our community,” she said. DeMino also serves as a historian for the school’s chapter of the International Thespian Society.

Mercy Asamoah is a member of the Madrigal Singers and the Guitar and Ukulele Club of Holy Cross. During the singing portion, the students responded to audience requests, including “On Eagles’ Wings” and “Somewhere Over the Rainbow.”

“A part of [the songs] were from our actual gig that we have tomorrow actually, so we just needed to play it so we could practice a little bit and then have a little fun with the songs of praise and worship,” Asamoah said, referring to their School Spring Concert.

Moberg, president of the academy’s Tri-M Music Honor Society, said the day was meaningful to her because of the in-person event.

“My second experience was much less fun than this one [due to the pandemic]it’s great because I got to meet people and interact with them face to face, and I can see their faces light up when it’s a song they’ve requested,” Moberg said.

The students sang accompanied by Laura Van Duzer on the piano. Van Duzer is chairman of the performing arts department at the academy, as well as a professor of performing arts. Eight of the 10 students in attendance today were members of Van Duzer’s Madrigal Singers, with the other two from the school’s performing arts community.

“Watching people come to life and really react to music that is meaningful to them is really great for students to see because they are talented, but it’s not just about putting themselves in the spotlight, it’s about bringing joy to others or sparking a memory,” Van Duzer said.

Residents could be heard whistling and singing along to “Somewhere Over the Rainbow” and “Down in the Valley,” according to Van Duzer.

“When you have patients with Alzheimer’s disease, for example, they will remember songs from their childhood long after they have forgotten the names of their spouses and children. You play a song from their childhood and they will sing it, they will dance it,” Van Duzer said. “There’s something about the music that sticks in the memory in a way that I still think is mysterious.”

Dementia is a general term for a group of symptoms that impair memory, while Alzheimer’s disease is a specific type of dementia that affects the brain. Alzheimer’s disease usually begins in the part of the brain that controls learning, as well as thinking and reasoning abilities.

According to the Mayo Clinic, research has shown that music releases musical memories that are “relatively immune to disease.”

Isabel Bouchard is the Village Volunteer Coordinator and Connected Living Coordinator. She said the seniors in the audience that day live in the assisted living community or memory care unit. Like Van Duzer, Bouchard spoke of the usefulness of music for those who suffer from memory loss.

“[Memory Care Unit] people with dementia are people who live with dementia, and I think those guys are actually the ones who enjoyed the program the most… when all else fails, music is definitely that thing that resonates with n’ anyone whether they recognize the song or not,” Bouchard said.

After their performance, the students helped clean up and organize by sorting through large Tupperware bins filled with various holiday decorations from the Village’s Easter celebration.

All of this, along with the construction of the balloon arch and the sorting of individual bamboo cuttings, was done to help the Village Volunteer Appreciation Celebration for the adult volunteers who help there.

Help when you need it: the NSW Retirement Village Residents Association (RVRA) answers your questions about living in a retirement village