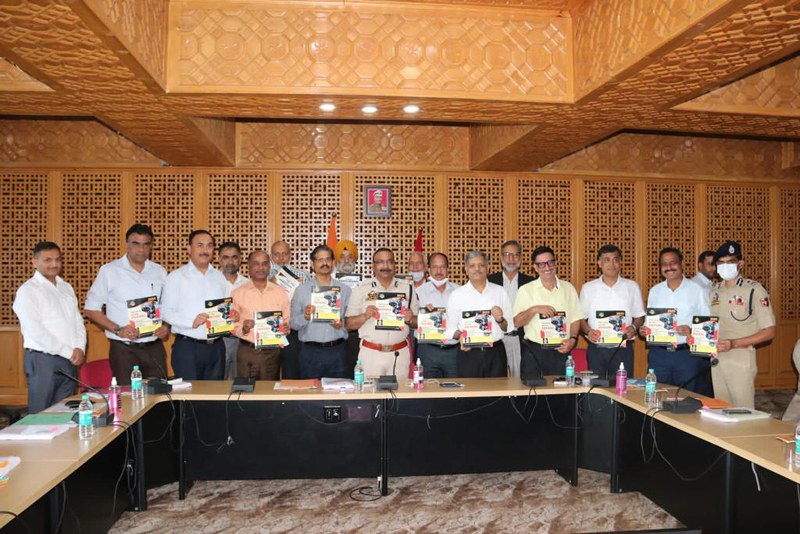 SRINAGAR, July 20: Director General of Police (DGP) Dilbag Singh today chaired the Police Establishment Board meeting at the Police Headquarters here today.
The meeting was attended by Special DGs RR Swain, AK Choudhary, Commanding General HG/CD & SDRF J&K, HK Lohia, ADGPs SJM Gillani, Dr SD Singh Jamwal, MK Sinha, Sunil Kumar, Danesh Rana, Vijay Kumar and AIG Personnel PHQ, Ramesh Angral and Police Headquarters Personnel Section officers.
During the meeting, the role of staff and OPS on various fronts across UT was discussed to the hilt and, accordingly, decisions regarding their conversion and out-of-turn promotions were made. Although some cases have been returned to the concerned for reconsideration.
During the meeting, a large number of SPO cases were discussed for conversion as constables/followers while 104 cases of out-of-turn promotions were discussed in different ranks. Most of the personnel recommended for conversion as well as out-of-tour promotions have been approved. All of these personnel have worked exceptionally well on the operations front in different districts of UT.
During the discussion, the DGP asked the field officers to personally review citations and recommendations for medals, out-of-tour promotions and conversion so that deserving staff are duly rewarded according to their role and contribution.
The participating officers submitted a number of suggestions which were discussed and the DGP asked to follow them on merit and as quickly as possible.
Meanwhile, DGP also released the first edition of the J&K Association of Retired Police Officers’ Association Vision & Mission Document (The Voice of PROANG) magazine at a ceremony held at police headquarters here today.
The DGP hoped that the J&K Police Retired Officers Association, as part of Police Pariwar, would continue to contribute to the welfare of retirees and their families. He pressured PROANG to do more and more for the betterment of retired J&K police members by acting as a bridge between them and the police department.
The DGP held a Darbar with all retired police personnel and officers and wished them good luck for the future. He assured the association of all possible assistance and said that the J&K police were doing their best for the well-being of retirees and that all serving staff were contributing to these measures.
PROANG President, Ghulam Hassan Zargar, PROANG Senior Advisor M Jamal Khan and other members of the association were also present on this occasion.