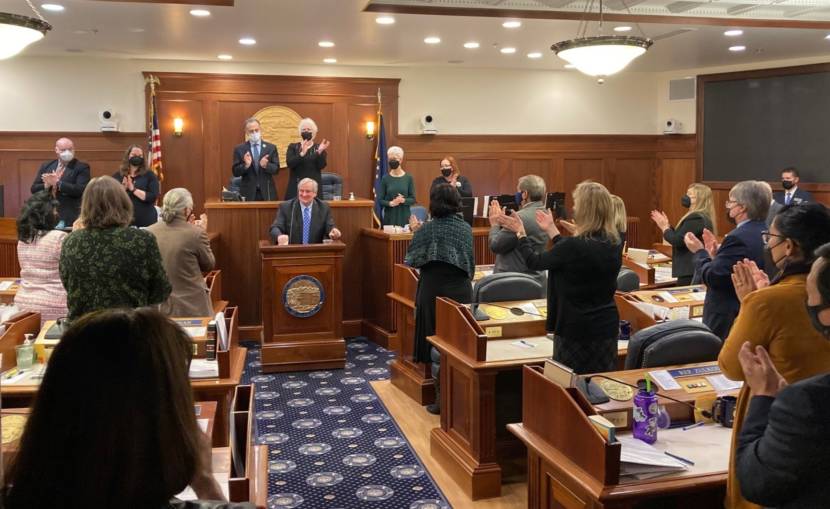 Alaska Supreme Court Chief Justice Daniel Winfree spoke to the Legislature on Wednesday about the importance of protecting democracy and maintaining the courts as an independent branch of government, during the assembly annual State of the judiciary address.

It was the 50th anniversary of the first time a Chief Justice addressed a joint session of the Alaska Legislature. Chief Justice Winfree spoke about the calls for racial, economic and environmental justice then and now.

“I was one of the young people 50 years ago who criticized the establishment and feared for the future of democracy,” he said. “Now I’m part of the establishment. But the current pain is just as visceral now as it was then. And I wonder why we haven’t made more progress over the past 50 years.

Winfree defended the independence of the judiciary from the other two branches of government. He said lawmakers take their responsibility to speak with their constituents seriously.

“We take equally seriously our duty to decide cases without being influenced by our personal opinions, by the political left, center or right, or by mainstream public opinion,” he said. “That’s the rule of law.”

He said judges are guided by the law, as well as the facts of each case.

“Our system of government will fail if judges rule in favor of a litigant solely because of who the litigant is, or what that litigant stands for or says. [as] beliefs, or if judges try to make decisions by following the whirlwind of then-dominant public opinion,” he said.

Winfree also described the impact of COVID-19 on the courts. He said no courthouses were closed and many court cases continued throughout the pandemic.

Winfree acknowledged the long hiatus in criminal jury trials, which resumed in January. He said it was difficult to safely accommodate the large number of people required in the courtrooms for these trials.

The Chief Justice outlined some of the budgetary demands of the justice system. They include $1 million for computer upgrades to protect forensic information. The courts suffered a cyberattack last year, but Winfree said they got over it and no personal information was taken.

Another $1 million would mean that public access to courthouse counters for information could be restored by Friday afternoon. Budget cuts in 2015 closed them.

Winfree also spoke about how the justice system is exploring the possibility of a new justice center in Bethel and a replacement building in Unalakleet.

“Our intention remains firm and firm to provide prompt and efficient forensic services in rural Alaska to the fullest extent possible,” he said. “And we will continue to look for ways to do that.”

Winfree did not address the debate over holding a constitutional convention, which Alaskans will vote on in November.

But he talked about the current constitution. He read a resolution from the delegates to the first constitutional convention in 1955, addressed to the children of Alaska.

“Take our constitution and study it. Work on it in your class. Understand its meaning and the facts it contains. Help others to love and appreciate it,” he read.

Winfree became chief justice last year, and chief justices normally serve three years. But under the constitution, Winfree is required to retire next year when he reaches the mandatory retirement age of 70.

[Sign up for Alaska Public Media’s daily newsletter to get our top stories delivered to your inbox.]