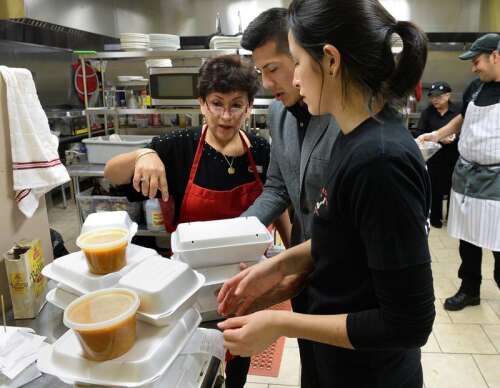 New London ― Since arriving in the city in 1990, they have weathered the Great Recession and the worst of the COVID-19 pandemic.

And, despite some reservations about New London’s current direction, entrepreneurs Bladimir and Rosaura Pedroza and their CJ Peruvian Bar & Restaurant on the corner of Broad Street and Connecticut Avenue aren’t going anywhere.

” I can not move. I own the building,” Bladimir said in a recent interview at the restaurant, where he was preparing for another day.

Alternatively, he could consider moving the restaurant to the middle of New London’s booming downtown scene, which he says puts businesses on the outskirts of town at a disadvantage. He is also worried about soaring real estate prices and what he sees as an increase in violent crime.

Things are different because of the pandemic, he said, although he is optimistic they will go back to how they were.

State-imposed COVID-19 restrictions disrupted restaurant business for approximately 15 months, beginning in March 2020. Prior to that, the Pedrozas kept CJs open until 10 p.m. every night to accommodate the traffic at the bar which they added to the restaurant during an expansion in 2018.. Their workforce grew to more than a dozen employees, including bartenders.

“Now nobody comes to drink after 8 or 9, that’s why the first few hours,” Bladimir said.

CJ’s, which serves lunch and dinner, is open from 11:30 a.m. to 8 p.m. Tuesday through Sunday and has six employees, none of whom are bartenders.

Peruvian natives, the Pedrozas―Bladimir is 58, Rosaura 60―met in New York in 1986 and married the following year at Manhattan City Hall. They first spoke to each other when Bladimir picked up a phone call intended for someone else. Rosaura was on the other end of the line.

“We talked for two hours,” recalls Bladimir. “I couldn’t meet her for two or three months.”

Inseparable ever since, the Pedrozas relocated to New London, where Bladimir had friends. He soon started working at the Benchmark Belt Co. factory in Madison, which no longer exists, and they both got part-time jobs at Foxwoods Resort Casino before going into real estate. They bought their first multi-family residence in the city in 1991 and eventually rented 23 apartments.

Luckily, Bladimir said, they sold all of their rental properties shortly before the US economy crashed in 2007. Now they only own the building that houses their restaurant and the house they bought from Waterford in 2003.

Running a restaurant had always been Bladimir’s dream, though neither he nor Rosaura knew much of what it would entail.

“My mother had operated a small restaurant in Peru,” he said. “I’ve always wanted to bring the Peruvian to the region. When we got here, you had to go to Hartford for Peruvian food.

When the building at 255 Broad St. became available, the Pedrozas purchased it and began a major renovation, replacing walls, plumbing, electrical wiring. Rosaura and Bladimir’s mother, who both knew how to cook, trained at a family establishment in Providence to learn how to cook for a restaurant.

The 2018 expansion quadrupled the size of their restaurant, which now seats 105 people. Before the expansion, its name was Pollos a la Brasa, which in Spanish means “grilled chickens”.

Known for dishes such as its long-marinated roast chicken and chicha morada, a “purple corn refreshment,” CJ’s caters to a mix of 40% American and 30% Peruvian customers, with the rest being “a variety of cultures “, according to Bladimir.

“We’re bringing some color to the city,” he said.

While Bladimir wants the Pedrozas’ adult children, Christopher and Jessica, to be interested in eventually taking over CJ, they have moved to Colorado and Tampa, Florida, respectively, to pursue other pursuits.

First in and last out of the restaurant each day, Bladimir sees no retirement in his immediate future, however intriguing the idea.